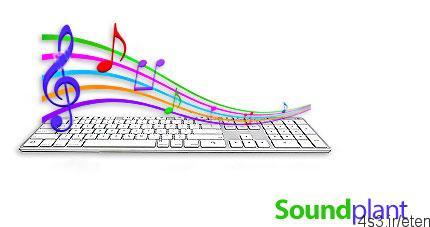 Soundplant is a digital audio performance program that turns your computer keyboard (yes, your QWERTY keyboard) into a versatile, low latency, multitrack sample-triggering device and playable musical instrument. It allows the assignment of sound files of any format and size onto virtually all keyboard keys, giving you hours of instantly-playing random access audio at your fingertips with no extra hardware needed. Use Soundplant as a performance, presentation, or installation tool, as a drum pad, as an educational aid, to mix together tracks in realtime, trigger sound effects or background tracks during a show, create music or loops, sketch sound designs, make beats, and give new life to old sounds – all via an input device you’ve been practicing on for as long as you’ve been typing.

standalone software sampler that uses your own samples to create custom soundboards, Soundplant is an infinitely flexible electronic instrument limited only by the variety of sounds that you feed it. An easy to use interface provides drag-and-drop configuration of each key, including options which control the way each sound is triggered along with several lightweight non-destructive realtime effects. Playing sounds are displayed with a progress bar and track time, and you can even trigger sounds with Soundplant hidden while using any other program.

Here are some key features of “Soundplant”:
– ۷۲ keyboard keys can be used to trigger sounds, all with very low latency
– drag and drop sound files onto keyboard keys for quick and easy key assignment
– plays virtually all sound file formats in existence, including .wav, .aif, .mp3, .mp4, .m4a, .aac, .flac, .wma, .alac, .wv, .ogg, .snd, .ape, and many many more, even audio from video files like .wmv, .mov, .avi, .divx, .mpg, .flv, .3gp, etc.
– ‘background key input’ allows Soundplant to continue receiving key hits while minimized or hidden — trigger sounds with global hotkeys while using any other audio software, typing a document, or doing anything else in any other program
– ۳۲-bit floating point internal mixing and up to 96 kHz output for ultra high fidelity — this is the best-sounding Soundplant ever
– capable of playing 256 sounds simultaneously, allowing for dense soundscapes and complex virtual instruments
– sound output device selection
– direct internal recording of Soundplant’s output
– launch an unlimited number of Soundplant instances for even more flexibility to output to multiple audio devices, gain more ‘banks’ of sounds and greater polyphony, and record multiple tracks simultaneously
– realtime volume, panning, and pitch control for each key
– realtime reverb, lowpass, resonance, and LFO effects for each key
– randomization settings on effects for richly varying the playback of sounds
– customizable sound triggering, allowing for looping, overlapping, restarting, muting, pausing, and fading, controlled by secondary key press or *new* by key release
– intuitive visual interface displays full playback progress info for up to 12 tracks in detailed view, or switch to simple view for a smaller window with larger keys
– in addition to keyboard key triggering, Soundplant can also play sounds via mouse click, like a ‘virtual cart machine’
– waveform display
– pitch adjust allows micro-tuning to the 100th of a semitone and a 10 octave range — plus, easily auto-assign the same sound to multiple keys at varying pitches to create playable instruments
– precise sound start and end offset control to the 100,000th of a second, more than most editors — plus, easily auto-splice pieces of a sound across multiple keys (for example, to extract individual drum sounds from a breakbeat loop)
– support for cue points in .wav and .swa files — easily set playback offsets to cue points defined in any audio editor
– onscreen keyboard keys are highlighted and animated as they play and can be color-coded and custom-labeled
– a true performance program that continues playing even while configuring keys and loading and unloading sounds on the fly
– works identically on Windows or Mac
– saves and loads keyboard configurations as .keymap files, which are fully cross-platform compatible and can be easily transferred between different computers with the handy ‘save keymap with sounds’
– play sounds entirely from RAM to eliminate disk use during playback, for best sound quality and lowest latency
– includes several options for minimizing CPU and RAM usage for performance tuning so that it can run well even on older computers — Soundplant can give new life to that dusty old laptop you thought you’d never use again